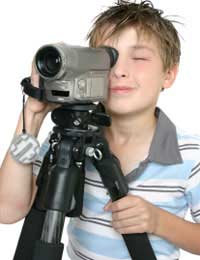 In addition to the camcorder itself you’ll probably need to purchase some accessories too. Some additional items might include features which you’ll never need to use but basic accessories are useful and in some cases vital, no more so than in the case of a spare battery.

Imagine if you’re only halfway through filming a special event and the battery cuts out. It’s every camcorder owner’s worse nightmare. Without a spare battery you might end up with an incomplete film, which is annoying at best but, at worst, it could even prove very costly if you are being paid to produce a video of a specific event.

By buying an extended battery, it can often boost your camera’s recording ability by up to 3 or 4 hours over its conventional battery and it’s always useful to carry a spare with you in any case, especially if you’re unsure as to the amount of time you’re expecting to film a specific event. And, if you’re away from home and likely to be filming over a prolonged period, you should take your battery charger with you.

If you don’t want your videos to appear all shaky and amateur, a portable tripod is a very useful piece of equipment, which will provide stability. It’s also much better when taking panned or tilted shots.

Camcorders are expensive items in themselves but you won’t want to have to pay out for a worn recording head so a head cleaner tape will help to keep the recording head free from dust and grime.

Furthermore, you may not have even realised the amount of dust that might have gathered on the recording head since you last used your camcorder and if you don’t clean the head regularly, you may find your recorded footage suffering from ‘dropouts’ in which certain video frames may go missing or, worse still, you might suffer an entire tape jam and miss capturing important shots whilst you’re endeavouring to remove the tangled tape.

There are different kinds of filter, which can be used to create different effects and resolve problems if you use them on a camcorder. A polarising filter not only removes problems such as glass reflections but sharpens colours too whilst a warming filter can help to make a subject’s skin tone look more natural.

Just like with batteries, it’s useful to always carry additional MiniDV tapes or DVD-Rs, depending on your camcorder’s format, in case you end up filming far more than expected and suddenly find yourself wondering how you’re going to store the additional footage.

Cameras are notorious for not performing too well in dimly-lit conditions so you may wish to carry an additional light that can be plugged into your camcorder and external microphones of several types can be bought, which can vastly improve audio performance, particularly when filming outdoors.

Audio headsets are another consideration as you may want to ensure that your audio sounds crisp and clean before you head back from your event and not discover that it sounds awful once you’re back in the editing suite.

Useful additional accessories are reflectors to compensate when filming in bright sunlight: