Home > Editing Videos > How to Edit Your Home Videos

How to Edit Your Home Videos 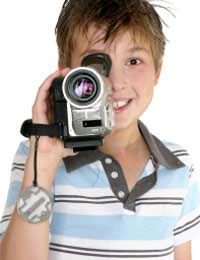 Because we are so accustomed to watching high quality production TV programmes and films it’s very rare that we get to see any home video movies which don’t seem amateur, and this is usually put down to not editing the raw footage. The first stage in the editing process is to import all of your video footage from your camcorder onto your computer – a process known as ‘capturing’.

Video footage will eat up a lot of disk space on your computer. So, if you have broken down your recordings into separate files, you may be able to simply capture those files you wish to work with onto your computer and discard the rest. Remember, 3 to 4 minutes of video can consume 1 gigabyte of space on a computer. Your FireWire ® interface in conjunction with your editing software will enable you to start and stop your camcorder’s control buttons via the editing software on your computer, so you can control that using the keys on the computer instead of having to fiddle around with the camcorder.

Once you have loaded the clips onto the computer you then need to select which clips you’re going to use and what aspects of the clips you want to keep by basically running through each one and picking out the bits you’re going to use. For example, in one clip, Johnny is weaving through the defence in a football match when he’s tackled and the ball goes out of play. You’ll want to keep that bit which, in editing terms, is called the ‘inpoint’. With most editing programmes, you can drag and drop the clip, which is usually represented by a thumbnail image, into the main editing window. So, with the ball out of play and needing to be retrieved, that’s of no worth to your film so you’ll next want to create the end to this scene, referred to as the ‘outpoint’. In this instance, it would begin with the resulting throw-in as Johnny receives the ball again, goes past two more defenders, rounds the goalie and thumps the ball into the back of the net. By creating inpoints and outpoints, you’re only choosing footage that you want to keep in your final version and all the rest will be cut. You need to follow this process with all of your clips.

Once you have been through all of your clips and have edited out the boring and/or irrelevant bits, you then need to put them all in the proper order as you tell your ‘story’ from beginning to end. This is commonly referred to as the ‘timeline’. Once you’ve got them organised this way, you can then play all of the clips in sequence.

Even though all of your clips run in logical order now and with all the boring bits having been chopped out, you’re not done yet. You’ll want to create a sense of each scene ‘flowing’ into the next so you’ll want to use numerous transition effects to achieve this. You might choose to have one scene fading out to black or morphing one scene into another (dissolve). These effects will also be represented by thumbnail images which you can drop into the appropriate position between two separate scenes on the timeline. You might also wish to add a voiceover to the film by recording your speech with a microphone connected to your computer and using software such as Windows Sound Recorder on a PC to capture your voiceover as a .WAV file. This can then also be imported into a relevant place on the timeline. Captions and credits can also be added to in much the same way.

These days, there seems no end to the kinds of effects and transitions you can incorporate into a film during both the filming and editing process and the more you use, the longer your film will take to edit but, if you want it to appear polished, it’s worth putting in the extra effort.