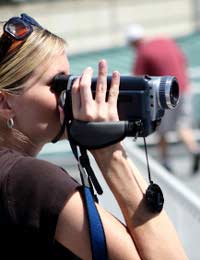 If you are shooting a home video in public places, the rules around what you can and can’t do and what you may be required to do by law will be determined by the type of video you are filming and the location in which you intend to film. Generally speaking, there’s nothing to stop you filming family members or friends in a public place nor do you need to seek permission from passers-by who may ultimately appear in your final cut as long as your camera isn’t concealed and your video isn’t going to be used for commercial use. However, there are certain things that you may need permission for and other issues you need to consider in certain instances.

Firstly, if you’re going to be making a video which involves filming on a public highway, you should speak to your local council office. This is because the council may require you to have public liability insurance if you’re using camera accessories such as a tripod, for example. You might also need permission to film in a particular location if you’re looking to distribute your video as a commercial product and you may need to obtain a signed location release form to allow this.

Once you enter a building, private land, an arena or maybe if you are filming on public transport, it is likely that you’ll need to obtain permission. Things like government buildings and schools are just two examples of very sensitive locations in which you will have to obtain proper permission before you attempt to make your movie. Filming children in particular is an extremely sensitive issue and many public places such as swimming pools and organised sports clubs for children will not allow you to film, even if you are the parent of a child who is taking part. Therefore, you’ll need to establish the rules surrounding that with the organisation in question before shooting your movie. You may also need to obtain parental permission if others’ children are likely to be featured in the film. The same sort of due care needs to also be taken if you’re filming vulnerable adults – people with mental disabilities, for example. Also, do bear in mind when filming children that, although a person of 16 is deemed old enough to give their own consent to be filmed, some may lie about their age to get on camera, so if you’re in any doubt, you need to be sure that they can verify their age.

If your public filming involves interviewing people or filming images of people who are integral to what your movie is about, you will need to obtain legal permission before you start filming, preferably in writing, in case they decide to withhold their permission later on.

With the increase in the use of a camera on mobile phones and the proliferation of using a camera phone to record video material, restrictions have tended to be eased somewhat with regards to things like filming at concerts or sporting venues these days. However, it’s useful to check that out first and not just assume it’s permitted to film in a particular place as you may find your gear is confiscated until an event is finished or you may not be permitted into the venue and might even be ejected from it. Also, consider privacy implications when it comes to public filming. Filming someone in the privacy of their own home using a zoom facility and posting it up onto the likes of YouTube, for example, can result in a breach of privacy law.

In general, if you’re unsure as to your rights and legal responsibilities when it comes to video and public filming, seek out permission from your local authority and perhaps even speak to the police. And, most importantly, even if you have been granted permission, always respect members of the public who don’t wish to be filmed.

How to Conserve Camcorder Battery Power
Share Your Story, Join the Discussion or Seek Advice..
i am wanting to live stream my garden from my web camera, i have read the laws on property boundrys and i adear to thatbut what if a person comes onto my property and walks in front of the camera as its live there is no videos or photos of the person i have looked all over the internet and found no laws on live streaming from my propertycan someone tell me if its legal or not
ima gecko - 2-Sep-12 @ 2:41 PM
What kind of public places need liability insurance? We're filming for a piece of course work for our college course and we want to film in a public park and also in a train station, do we need to get permission for someone before we film here? If so what do we need to do and who do we contact? thanks
filmguy - 18-May-12 @ 5:31 PM
Title:
(never shown)
Firstname:
(never shown)
Surname:
(never shown)
Email:
(never shown)
Nickname:
(shown)
Comment:
Validate: