Home > What to Film > Film The Birth of a Child 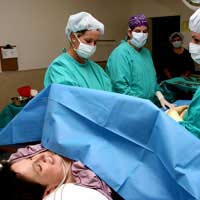 To capture on film the moment when your child is born will be something that both parents and, later on in life – the child him or herself, will be able to look back on as a keepsake that’s very special to them. Most of us will have seen childbirths on TV and will have conjured up images of what we want our own childbirth video to look like but it’s not as quite as straightforward as that and there are a number of things you need to consider.

Make Sure You Have Permission

If your child is being born in hospital, remember that not all hospitals will allow you to film the birth of your child so it’s important that you gain permission from the hospital to do this. If the hospital grants you permission, you may need to also obtain a signed release if you intend including any footage of the medical staff themselves.

You’ll also need to find out what is and isn’t permitted during filming. This might include the hospital telling you where to stand so that you don’t get in anybody’s way as although the video might be important to you, the medical staff will only be concerned with ensuring that your child is delivered safely and not about any filming shots or angles etc. you may wish to set up.

Considering What To Film

Even as the ‘director’ of the film, precedence over what kind of shots you take must remain with both the hospital and the mother. For example, a hospital may have no problem with you filming a natural childbirth but they might not allow you to film a birth by caesarean section. They might also place other restrictions on what you can and cannot film.

Also, the mother herself should be asked what she wants to have included. Issues of protecting both her privacy and modesty need to be taken into account so you need to discuss this with her prior to filming and find out what the boundaries are.

Providing the hospital permits it, use a tripod. You might be the most accomplished amateur film maker around but nothing can prepare you for witnessing the birth of your own baby and how you will react. You’ll possibly suffer from nerves and your hands may start to tremble in addition to the mother needing your support in some way so, where possible, try to keep your filming hands-free if the hospital permits you to use a tripod.

Better still, hire a professional videographer or perhaps use another person who’s not quite as emotionally attached to the situation to film the birth so that you can concentrate on witnessing the birth yourself without having to worry about filming and also support the mother. However, once again, you’ll need to get the consent of the hospital to enable you to do this.

Avoid too much use of panning and tilting as this will result in more blurred images. Don’t just focus on the actual birth itself but take the opportunity to film things like the father holding the mother’s hand or offering support before the baby is born as well as footage of the delivery team if they permit you to film them. Then you’ll want to film the baby in mother’s arms after it’s born.

The key thing to remember however is that this is not an occasion where you should be placing any emphasis on filming technique or worrying about how your finished video will appear. This is a life experience that you’ll only rarely witness in your own life and it’s also a time when the requirements of the medical team and the mother herself far outweigh anything to do with the production of your childbirth video.