Home > What to Film > Making a Documentary 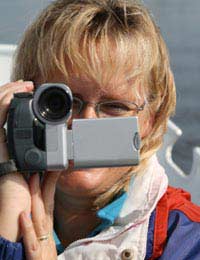 Documentary films can take on various guises. They can be hard-hitting social commentaries on certain aspects of life which you feel passionately about or perhaps you want to illustrate some kind of social injustice or they can be a lot more light-hearted and humorous in nature, similar to a fly on the wall approach where what people do and say and how they interact with each other drive the documentary forward. Before making an amateur documentary feature though you need to feel passionately enough and believe that you have some kind of story worth telling. Audiences are very perceptive and you can be certain that if your enthusiasm as the producer does not transfer to the film, then it will almost certainly be impossible to convince your audience too.

Before even start shooting a scene, you’ll need to have planned some kind of structure for how you want the documentary to evolve. The chances are that you’ll need to impart important factual pieces of information to your audience as well as seeking out other people’s opinions. You’ll need to try to arrange a suitable time and day to meet up with subjects whom you intend to interview and it’s quite possible that the people you want to interview will only agree to that on condition that they know the questions you’re going to put to them beforehand and they might also tell you the subjects they’re not prepared to discuss on camera so you need to be prepared for that and respect their wishes, otherwise they may not grant you an interview.

Depending on your particular standpoint as the producer of the movie, you may wish to make the documentary a balanced view of a particular issue or you may simply be trying to highlight an injustice. It might not even be anything like as serious or contentious as that. For example, it might be a relatively ‘feel good’ documentary about how, perhaps, a community blighted by teenage social disorder has been transformed by a brand new leisure and youth centre which has been opened.

The key to the production of any good documentary is thorough and accurate research. You’ll need to have identified the main ‘players’ you’ll want to interview and it will come across a lot better if you can remember the questions to ask without having to resort to reading them from a clipboard as you’ll find that you’re more likely to get open and honest answers whereas people can sometimes become defensive if you seem to be ‘interrogating’ them by using a list of questions from which you’re reading from a list.

A documentary is all about the subject matter and the people involved and their opinions. Therefore, this is one area of home movie making where you don’t need to worry about incorporating pans, tilts and any other special effects, although it does help to have a good microphone(s). A single, hand-held camera which can be mounted onto a tripod for any lengthy interviews or static shots should be perfectly adequate for a documentary style feature.

At the end of the day, it will be the subject matter and the opinions of the people you include in the documentary feature which will determine whether it’s successful or not as well as your belief in and commitment to the project.