Home > Shooting Videos > How to Shoot Your Video 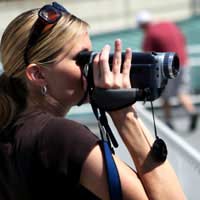 It’s often the rush to just grab the camcorder and film away on the spur of the moment that makes a lot of home videos come across as boring and amateurish. However you don’t need to be a highly proficient and experienced film maker to produce something that many people will want to watch. All you do need is to plan a little and follow some important guidelines.

It all starts, of course, with your camera and you can find out more about choosing a camera in another article featured on this website entitled ‘A Camcorder To Suit Your Needs’. You’ll probably want to use a digital camcorder and don’t forget the digital tape else you’ll be storing everything on the camcorder’s hard drive which means you’re likely to run out of space long before you’ve finished filming.

Overuse of the zoom lens – whilst it being a useful tool – is probably one of the most off-putting aspects of home videos. Get into the habit of zooming in or out to the appropriate shot whilst the camera is in pause mode, then hit the record button. You can then zoom in or out, whichever is appropriate but do it slowly and use this feature sparingly. Never zoom in then out on the same shot. It lacks professionalism.

Panning to capture a wide view of a scene can be particularly deceptive on a camcorder. Imagine you’re taking in the panoramic view of a magnificent beach. Your eyes are able to adjust quickly to capturing the entire breadth of the view. You may have to turn your head a little but your peripheral vision enables you to take in far more than what a cameral lens would be able to do with the same amount of movement. Therefore, if you decide to use panning during a particular scene, you must move very slowly to let the lens adjust otherwise your panned image will just become a blurred one.

Again, our own eyes, unlike a camera lens, are far better equipped to adjusting to both bright and poorly lit conditions and can compensate for both accordingly. Camcorders have difficulty in poor light so you need to ensure the space in which you’re filming is well-lit and don’t forget the golden rule of never filming the subject with the light behind them. It should always be behind you. Or use a backlight on your camcorder to compensate.

Try to let all audible sounds and conversations come from the subjects of the video or any background music you add on later and not from you, the cameraperson. Running commentaries can be extremely irritating and the sound balance goes out of sync as you’ll probably be using the camcorder’s built-in microphone whereby your voice will be much louder than the subjects of your film. Getting into a custom of being either the cameraperson or the subject of the film is not a bad habit to get into if you want your video to have more credibility.

By following storyboards which you should have created before shooting your film, it will give your video a much greater sense of cohesion and of progression much in the same way as reading a book with a beginning, middle and end. And, if you’re a newcomer to filming, this will also help you shoot in a more chronological order which not only helps you to keep your mind focused on the job in hand but will facilitate editing later.

If the participants of your video are not used to having a camera pointed at them, you run the risk of contrived posed shots as they try to ‘ham’ things up for the camera. You should try to avoid this as it makes your film look amateur and instead try to capture spontaneous behaviour which looks more real.

There’s nothing worse than seeing a home movie when the cameraperson is walking and filming at the same time, usually resulting in shots of the sky/ceiling or the pavement and the cameraperson’s feet with just the odd glimpse of the subject in between. If you don’t want your video to resemble the re-enactment of an earthquake scene, use a tripod or if you don’t have one, find a table or some other solid object like a wall which you can lean against to ensure stability of your filming.

Capturing The Essence As Opposed To The Whole Event

You don’t need to film the entire process of a specific event. In doing that, you’ll end up with a film that’s too long and which will bore your intended audience. For example, a scene in which a child is unwrapping his Christmas presents should run to no more than a minute even if he takes 10 minutes to open them all. In that minute, you’ve said it all really.

Think Of The Screen in ‘Thirds’

Unlike a still photograph where, for the most part, you’d usually try to keep your subject in the centre of the picture, by splitting up the viewfinder on your camcorder into 3 vertical columns – left, centre and right, mix it up and film your subject in both the left and right side of the viewfinder now and again to add variety to your shots.

Finally, don’t neglect your audience. Unless you’re filming just to please yourself, you’ll want your audience to enjoy your video. Refer to another article on this website called ‘Intended Audience For Your Videos’ for more useful information.

In following these tips, you’ll have the basis of a recording which has the capacity to be turned into a decent and well received home video. The next stage is the editing and you will find more articles about that process on this website too.