Home > What to Film > Film Your Baby Reaching Milestones 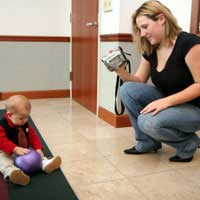 Having a baby is possibly one of the most common reasons for buying a camcorder in the first place, and no doubt you’ll want to capture all of the key moments of your son or daughter’s first year or two, in particular. And, whilst we can all probably jot down all those special occasions that we’d want to commit to tape, when considering the types of event we would incorporate into a baby video, you’d be surprised at how much you’d forget once baby has arrived and is consuming your world almost 24 hours a day. Therefore, here a few tips to remind you of the kinds of things you’ll probably want to include.

Even though your first thoughts are likely to be focused on what specific behaviours, activities and emotions you’ll want to film when your baby arrives, a well-made baby video will begin with some scene establishing shots. These may include things like decorating the baby’s room and putting up baby toys above their cot which they can look at and grab as baby becomes more aware. It might also include footage of Mum’s pregnant belly and, in some cases, you may even be considering filming the birth itself! By shooting scenes of some or all of these events, you’ll be establishing the setting for what the video is going to be all about.

From Hospital to Home

No doubt, you’ll want to film baby as soon as they’re born, resting in the arms of Mum or Dad. Bringing baby home from hospital is also a joyous experience and you might want to include scenes of thanking the doctors and nurses and waving them goodbye as you leave the hospital and also when baby arrives at home for the first time.

The ‘First Of Everything’

It’s simply magical to see a new baby as they get used to their new surroundings and a scene of them being placed in their cot and gazing at their new surroundings for the very first time is going to be really special. The word ‘first’ is important here because, as time goes by, you’re going to want to capture their ‘first’ everything. You’ll need to keep your camcorder at your fingertips as you try to capture scenes of their first smile, first tooth, first attempt at crawling, first attempt at walking, first laugh, first words, first attempt at eating with a spoon, first bath etc.

It’s so easy to remember the good things that you’ll want to preserve on film when it comes to keeping a video diary of your baby’s development that it’s so easy to overlook some of the ‘hairier’ moments. These might not seem that relevant upon first consideration but, rest assured, they provide poignancy to your baby video and often result in some of the funniest moments when you look back on the video in years to come. And, furthermore, they represent the true reflection on what baby’s first years were like. This might include scenes such as baby tantrums, Mum or Dad cursing as they get dragged out of bed at unearthly hours of the night, bath times filled with loud screaming etc.

Remember To Include Friends and Relatives

Whilst a lot of your baby footage will include the baby itself and with Mum and Dad, it’s important to also capture those moments when other relatives and friends are interacting with baby too. Babies often display different behaviours and characteristics when around different people and it’s interesting to capture these on film too. No doubt the most obvious opportunity to do this is when you’re shooting any christening scenes, but be sure to film others playing and interacting with baby in their usual environment too as baby may be react very differently to the same actions performed by different adults.

Whilst baby’s actions and their interactions with things around them and the people with whom they come into contact will often tell viewers the ‘story’ itself, without the need for running commentary from Mum or Dad, it’s often useful to introduce certain sections of your film to establish a context of when it was shot. As parents, you may choose to film a piece to camera holding baby and giving your thoughts as to how your lives have changed since baby came into your lives, for example.

The important thing is to keep the camcorder handy and ready to go as you never know just when baby is going to discover new things in their world and their reactions to them. And, don’t worry about shooting too much footage. This is one instance of where too much is better than too little, if you want to ensure that you don’t miss out on filming baby’s ‘first anything’.