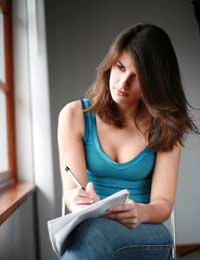 When writing a screenplay, you need to have an interesting story to tell with a beginning, middle and end and know how to develop that through each stage in order for it to build up towards its climax and ultimate resolution. Basically each aspect of your plot development will contain a series of events.

As mentioned in other articles contained in this section, a good screenplay will have a main character that will be faced with certain dilemmas and obstacles which they must try to overcome. Therefore, when writing your story, your screenplay will contain a mixture of both positive and negative events to reflect the setbacks your main character will encounter along the way to achieving their goal and the triumphs they have when they reach a particular goal.

The main reason you need to have a mix of both positive and negative is that your storyline will become too boring and predictable if the main character never encounters any setbacks as it’s these which will create an air of tension and conflict which is more likely to keep an audience interested. On the other hand, you can’t have your main character continually beaten down as they’ll end up appearing as a loser and if your audience fails to see any hope for them, they’ll lose interest.

Creating a conflict for your main character lies at the very heart of your entire screenplay's development. This is where your plot needs to expand upon their goals and upon the external forces that are there which are designed to prevent them from reaching them, be that specific situations, other characters or both. At the same time, plot development also allows you to expand upon the inner forces and turmoil that your main character is going through – for example, the fears and insecurities they’re facing as they continue to strive towards their goals.

All screenplays need to be divided up into 3 parts – the set up, the main conflict and the resolution.

The set up is the beginning of the film and is where you introduce the main character and begin to learn about their dilemma. What you tend to often find is that the main character is portrayed living their normal day to day existence then within a short period, something happens which throws their life into chaos or creates trouble.

The main conflict forms the largest proportion of your screenplay and is where most of the action takes place. Here, your plot development will tend to focus on the events which are conspiring to throw your main character into deeper and deeper trouble. Here’s where you will introduce the obstacles and other characters which will be trying to keep your main character from achieving their goals and it will also reflect what they, in turn try to do to prevent external forces from defeating them. Ultimately, this builds and builds into a climax at which point the main character lives, dies, wins or loses.

This part of your screenplay needs to be kept relatively brief and simply focuses on tying up any loose ends. With the climax of the main conflict having being resolved, the audience have now been told the whole story so you don’t want the end to go on for too long or the dramatic appeal of the film will lose its desired effect.

Of course, there are variations to this kind of plot development. Thriller and horror movies in particular tend to reach a dramatic climax in the main conflict yet you’ll often find that there’s one final twist in the tale in the resolution just when you think the villain has been defeated.

And although there are many different genres of film, if you study them all closely, you’ll find that the sequence of events for plot development will all broadly follow the above whether it’s a romance, a murder/mystery or a horror movie.