Using Your Camcorder: The Basics 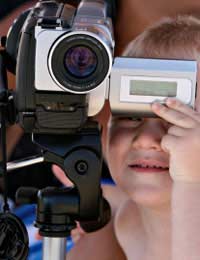 Just like with the earliest cameras ever invented the purpose of a camcorder is to capture visual memories only, in the case of a camcorder, they are ‘moving’ images as opposed to still ones.

People who buy camcorders tend to broadly fall into a number of quite easily defined categories – parents who have children or are about to have them, grandparents with younger grandchildren, people who travel on holiday a lot and the ‘tech wizard’ who wants to produce the next Hollywood blockbuster.

Throughout other articles on this website, you will encounter a number of technical terms and will discover camera features which can all perform ‘magical tricks’ but the basic principles upon which most people will buy a camcorder are its ease of use in terms of being able to handle it physically and navigate the menu easily, the picture quality, the simplicity of recording, playback, copying and transferring films and, of course, its price.

The Basic ‘Science’ Behind A Camcorder

A camcorder has 3 basic major components – Firstly, there is a camera section made up of a Charged Coupling Device (CCD) which ultimately converts the tiny pixels of light it receives into the digital image you see as the end result, a lens and motors to control the focus, zoom and aperture.

Secondly, it has a VCR unit which is basically a scaled down version of your VCR (video recorder) which you’ll have used in conjunction with your TV and finally, there’s the viewfinder which also receives the image so you can see what you’re filming. These simply resemble tiny colour TV sets which you usually flip open when you’re about to film. So, it captures both visual imagery (cam) and audio sounds (recorder) and, hence where it gets its name ‘camcorder’ from.

People naturally treasure their memories and wish to preserve them for as long as they can. A camcorder enables them to do this with the result that they can relive their experiences long after events have taken place, share these memories with others and pass them on to future generations to enjoy. The most commonly filmed home video events are weddings, birthdays, holidays, christenings, baby activities, child activities, pet activities and other special occasions.

What Happens When You Have Created Your Film

Some people connect their camcorders up to their TV sets, gather a few friends and members of the family around the television and watch their films that way. Others choose to transfer their film to videocassette tape or, more likely these days DVD, which they can pull out and play anytime and others transfer their film onto their PC where they may want to edit their efforts in order to condense their footage to make it more interesting to viewers at which point they’ll then put it onto DVD to watch or may even watch it on their computers.

There’s no end to what you can film using a camcorder and, although it may seem far too technical to some, it’s pretty straightforward to do all of the above once you’ve got your head around the technical aspects a little. Once you’ve achieved that, your camcorder will be one of the most, if not the most, vital piece of equipment you’ll currently possess for keeping those treasured memories alive for years to come.