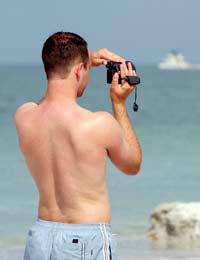 There are several techniques you can use to make your family videos on the beach truly capture the essence of your holiday and there are also a couple of things you need to be careful with too. Beaches make a wonderful backdrop to a home movie but the important thing to remember if you want it to interest a wider audience is to make sure you make your main priority the people in the film. No matter how picturesque a beach it is, your movie will end up lacking in interest value if you don’t focus on people - that’s people having fun, swimming, playing games, sunning themselves etc.

Pay Attention To The Background

There are so many distractions on a beach that they can often divert the attention of the viewer when your aim is to focus on a particular subject be the subject a person or if you’re taking a scenic shot. Therefore, when setting up filming, stay aware of any distractions that could be going on in the background. Things like bins, misplaced towels flapping out etc. Either remove things that could get in the way or change the angle from which you film.

Capturing The Beauty Of The Beach Itself

Unless you’re going to get up at the crack of dawn or you wish to capture the tranquillity of a beach as the sun sets, it’s difficult to take some kind of sweeping panoramic shot of a beach to capture its essence as there are always going to be other distractions going on. Furthermore, one of the biggest traps amateur film makers fall into is using the zoom to capture something majestic, e.g. a mountain range, in the distance as the effect rarely works given that by zooming in close, you’re taking the subject entirely out of context. By focusing on the people in your film, their activity against the backdrop of the beach shot from different angles should be sufficient to illustrate the beach’s beauty. Sometimes maybe seeing if you can shoot the beach from a higher vantage point can help also. If you really want to take a panoramic or zoom shot, do it slowly and gently perhaps trying to incorporate some activity into the scene, e.g. slowly zooming in on a fishing boat that may be coming into port.

One of the biggest problems in filming at the beach is, ironically, the sun itself. It will be reflecting off the sea and the sand and a video camera’s automatic exposure may simply not be adequate enough to prevent overexposure and, in some cases, create a complete ‘white-out’. However, you can solve this problem by fitting a neutral density filter onto the camera.

If you’re filming people on the beach having a good time, the sound quality may not be too important as it will be their actions and any activities they are engaged in that will be the main focus of the film. However, where dialogue is important, you must take into account any wind which might be present as that can render audio virtually meaningless and the wind will often sound far louder when played back than it appeared when you were actually filming. Therefore, if your camera has a wind reduction switch, turn it on. Alternatively, if dialogue is going to play a major part in your beach film production, it would be better if you bought an external microphone with a fur-headed cover to minimise the effects of the sound of the wind.

Take Care Of Your Equipment

It should go without saying really but both salt water and sand can ruin your video equipment so pay extra attention to keeping your camera and all of your accessories dry and free of sand particles when filming on the beach otherwise you might end up finding that it was a complete waste of time and effort and a costly experience given that your camera may have been damaged beyond repair.