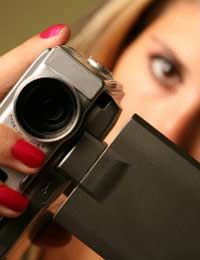 If you shoot a home video from the same angle for every scene your viewers will end up becoming bored and are more likely to switch it off no matter how compelling you think the video might be. Therefore, you should always aim to shoot from a number of angles. Not only can angles be used for dramatic effect, they will help to keep your audience from losing interest. Here are some good techniques to help you choose the best position for a particular scene.

Usually, when filming a conversation between two people, you’ll want to establish the scene by showing the two people together. This is known as the ‘master shot’. However, to create a sense of them engaging in the conversation, you’ll want to film from behind the shoulder of each person, whenever it’s their time to speak. This gives the viewer more of an insight into seeing things from the speaker’s perspective, from whichever person is speaking at the time.

If you’re making a proper video as opposed to simply capturing whatever is happening at the time, the best way to do this is to shoot the same scene 3 times – once as a master shot with both of them in the frame and then the same scene again from over the shoulder of each person, making 3 scenes in all. That way, when you get to edit your footage, you’ll have the same scene filmed from 3 different angles and you’ll be able to determine which angle work best for which pieces of dialogue.

By filming from below the subject or action, it can have an extremely dramatic effect. A good example of this is if you’ve ever watched the Grand National on TV. Often, they’ll place a camera on the jockey’s helmet as opposed to the usual shot which is usually filmed from a crane high above the action.

By placing the camera lower, you get a real sense of the drama and danger as the horses attempt to jump each fence, giving you a real feel as to what the jockeys must be experiencing. Shooting low down can also create a sense of the power of a particular character over another. An example of this might be where a parent is chastising a child. By creating an over-the-shoulder shot of the child with the camera pointing up at the parent, you are as the viewer, in effect, being put in the child’s shoes and can gain a real sense of how the child must be feeling as the camera points up to the face of the parent who is shouting down at the child below.

Shooting from above is another good way of establishing a particular setting. The most common and dramatic effect of this is often used in sporting events where large cranes or even air ‘blimps’ will look down over a stadium from hundreds of feet above. You’ll often see the skyline of the city in which the stadium is located before the shot will cut away to an interior view of the stadium thus the scene of the action has been established and you can now concentrate on the sports event itself. Other reasons for shooting from above are to convey a character’s power and authority over another. For example, the previous scene discussed here with the parent berating the child could also be filmed from over-the-shoulder of the parent with the camera looking down onto the child to give the viewer the sense of the action from the angry parent’s perspective.

Therefore, as well as keeping viewers interested, shooting from different angles helps to establish the mood of a scene or can be used to heighten the dramatic effect of a certain action or piece of dialogue. It can be used to create a psychological effect of power or weakness displayed by a certain character and can set the scene by establishing the context in which it is set.

Furthermore, varying the angles can also be used to eliminate any background images which bear no relevance to what you are trying to portray in a particular scene. An example of that might be if you’re trying to convey a sense of a lively atmosphere inside a stadium at an event, where a particular portion of the seating area is empty. Obviously, if you’re trying to create excitement, you’ll need to adjust your angles for shooting to avoid filming the empty part of the stadium where that is possible.