Home > What to Film > Capturing a Birthday Celebration on Video

Capturing a Birthday Celebration on Video 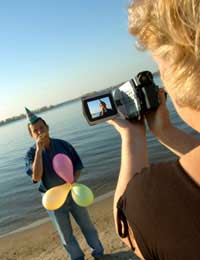 Birthday videos will differ, to some extent, depending on the nature of the celebrations that are planned and of course, the age of the person whose birthday it is. However, although the composition of the video may differ, there are some key scenes which should always be included and some tips and skills which can be utilised to create a successful birthday video.

Firstly, you’ll want an establishing shot of the exterior of the venue or location at which the celebration will be held. This could be the outside of a house, a church, a village hall, a school, on a beach – in fact, it could be anywhere but you need to capture the place where the celebration is being held from outside the venue, followed by another scene of the guests arriving. This could include a meeting and greeting scene or a shot of children playing.

If there are ‘special guests’ at the celebration, ensure that they are included and given prominence on any meet and greet scene – a child’s grandparents, for example, if it’s the child’s birthday. This introductory scene should reflect the ‘coming together’ of everybody in order to celebrate together so adults laughing and talking and children playing help to establish a sense of ‘fun’.

The action should then centre on the main location where the actual announcement of the birthday celebration will take place. Wider shots are needed here to illustrate the decorations which have been put up, honing in on any unique or funny, personal banners or balloons which might say something complimentary or even witty about the birthday boy or girl (or man or woman) and shots of people enjoying the food and drink. If you have hired an entertainer, make sure the highlights of their act are also included.

The Birthday Announcement Itself

This is the real reason you’re filming so it’s important you capture all of the following if they apply: No doubt music will have taken over by then as people dance and let their hair down but if the mood were slightly more formal, this would be the right point during editing to incorporate appropriate background music into your video.

The End Of The Celebration

This should include the guests leaving the venue, with any last minute hugs and kisses taking place included too. Depending on the formality of the celebration, it’s sometimes fun to film the aftermath, in terms of the mess that’s been made, showing that everybody got ‘stuck in’ to the celebrations and enjoyed themselves.